In the lead up to Recycling week from the 12th to 18th of November, I’ve been thinking about something that is very important to me; Plastic reduction.

In this two-part blog, I want to think about the challenges of our current consumption in this space and part 2 will look at what the Healthcare industry is doing about this issue.

Nowadays, it is unlikely you will go through a day of your life without being exposed to a message regarding the reduction of waste and single use plastic, and rightly so.

8.3 billion metric tons of plastic has been generated since plastic was introduced in the 1950’s.

The amount of plastic produced in a year is roughly the same as the entire weight of humanity, and virtually every piece of plastic that was ever made still exists in some shape or form.

91% of plastic waste is not recycled and as we are now well aware of, nearly all plastic does not biodegrade.

We are already seeing the effects of this on our food chain, with microplastics being found in canned fish, fresh fish, shellfish and even sea salt.

One organisation doing fantastic work on the great barrier reef islands are Wild Mob https://wildmob.org/. Having been on a few Wild Mob trips, I have seen firsthand, the sheer volume of ocean plastic waste that washes up on beaches, in already threatened habitats. Wild Mob’s work is never ending. In the below picture, Wild Mob Volunteers collected over 7 full bags of plastic waste off prime turtle nesting beaches. This same beach had been cleared only several weeks before this picture was taken. 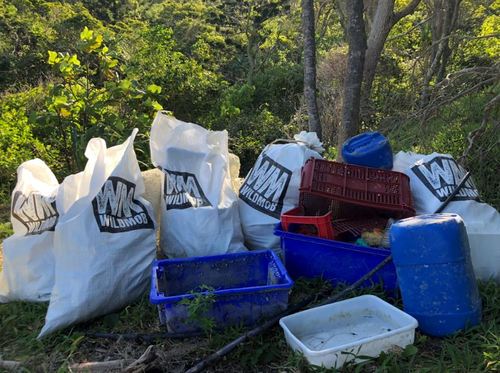 On these beaches, Green Turtles and Flatback Turtles return to lay their eggs. Only 1 in 1000 baby sea turtles will make it to adulthood and, depending on the species, they are not sexually mature until they reach 30 to 50 years, and they nest only every two to 4 years. These incredible creatures already have it tough, and with rising global temperatures and sea levels, their future is very uncertain. The gender of a sea turtle is determined by the temperature of incubation. Higher temperatures determine females. The rising Sea levels rise mean Turtle nests are more and more at risk, as they nest above the tide line, but with rising sea levels nests are being washed away. Wild Mob have seen huge king tides recently in the South Cumberland Islands, prime turtle nesting habitat.

Compounding all the adverse factors facing sea turtles, is plastic marine waste. During the first ten years of their lives baby turtles eat anything in front of them, as they are pelagic and carried on ocean currents. After this, they forage over vast areas of ocean for their food and research has shown that plastic waste, smells and looks like food to many marine species. A floating plastic bag can easily be mistaken for a juicy jellyfish. This is a huge threat to the many turtle species.

Clearly there is still a long way to go, but the efforts being made are promising and give hope for the future.

So how does this relate to Healthcare as an industry?

We have asked our clients one question:

”Healthcare is an industry with high plastic waste production (as you would expect) so what, if anything, are you doing to reduce your plastic / waste footprint?”

I’ve been surprised by the high levels of feedback received and in the next part of this blog, I’ll share some of those with you.